How to Get More YouTube Views: Taking a Lesson from Beauty Guru James Charles 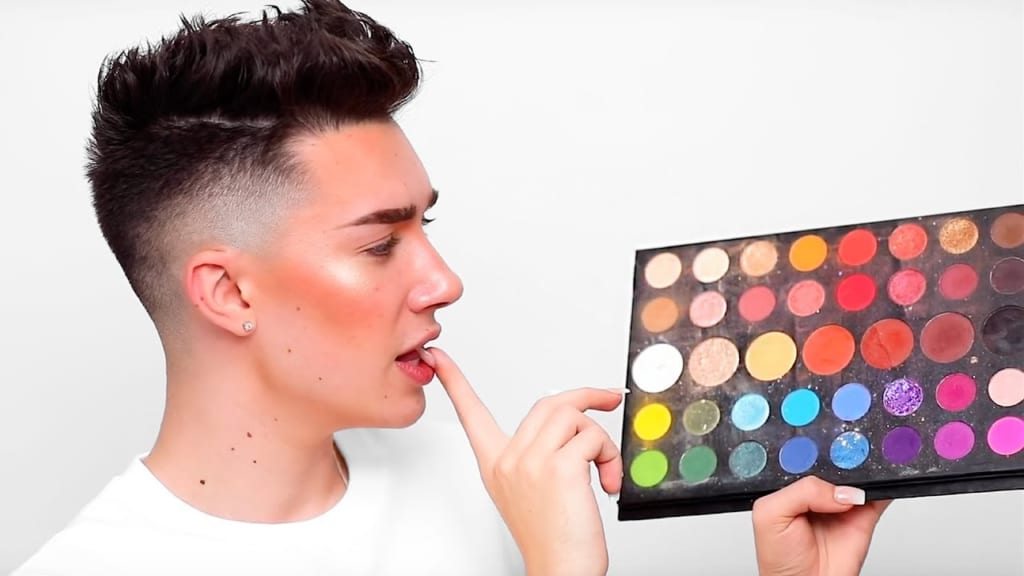 This handy little guide is bringing you a collection of James Charles' top five most viewed YouTube videos! What's more, we're including tips for YouTubers looking to supercharge their channels and get the views they deserve on their videos. There's no 'get views fast tricks' in this article, rather we're bringing you authentic advice to organically improve your YouTube videos.
Additionally, more views equals more money on YouTube, so if you're looking to monetize and get paid for what you upload, then getting eyes on your channel is key.

Let's learn from one of the greats! We'll analyze James Charles' most viewed videos to learn why they performed so well and how you can follow in his footsteps to improve your own content.
If you're a beauty YouTuber, then this guide is a must-read if you've been trying to get more views on your videos with little success. In fact, any YouTuber could learn something from the magnetic personality of James Charles and his fantastically produced videos.

Let's jump right in! Check out the below top five most viewed videos from the James Charles channel and make sure to bring pen and paper because you'll want to take notes.﻿

How to Get More YouTube Views: Taking a Lesson from Beauty Guru James Charles :

1. How to Engage Viewers

First up is the absolute most iconic video on the James Charles channel, and it's the "Doing Kylie Jenner's Halloween Makeup" video with nearly 29 million views and 1.5 million likes at the time of writing this guide.

There's no denying this video blew up on YouTube. It has become one of the most popular videos ever uploaded by James Charles, and for good reason. A lot of commenters commended James for treating Kylie like a normal 'human being', bringing out a different side of her in the video. This aspect made the video particularly special.

Most Viewed Video No. 1

So sure, Kylie Jenner being in the video has a lot to do with the success, but we can't all convince celebrities to come onto our channels. Let's focus on two special things James does in this video instead, and these two techniques are meant to engage the viewer. Engaging the viewer is what keeps people watching, which is incredibly important for your channel stats concerning watch time.

YouTubers often greet viewers at the beginning of a video, but continuously acknowledging the viewer throughout the video is the key to engaging them, welcoming them into your video, and keeping them watching.

We highly recommend coming up with a catchphrase for your own channel, such as a word to call your viewers. PewDiePie, another uber famous YouTuber, does this by calling his subscribers "bros". Think of something that suits your channel niche—it can be as simple as calling your subscribers your team. Just use words that evoke a sense of community and inclusion.﻿

2. How to Promote Your Channel

With over 28 million views, this next video is another superstar from James, but this time it's a little more makeup-focused. For the video, he bought a fake James Charles eyeshadow palette and the viewers get to see his reaction to the imposter.

Reaction videos are incredibly popular on YouTube, so this video is following along those lines since, from the title ("I Bought A FAKE James Charles Palette"), we obviously become curious about how he will react. This works even though the title doesn't specifically say "reaction"—it's just implied by the title and the thumbnail where he's holding both palettes and looks very concerned. Use this technique in your own reaction videos!

Most Viewed Video No. 2

Let's look at the three steps James takes in this video to skillfully promote his channel. He uses both subtle and direct methods to encourage viewers to stay on his channel, earning him more views.

Step 1: At the very beginning of the video, James welcomes viewers back to his YouTube channel. It may seem like a small gesture, but consistently welcoming viewers who have returned to watch your videos creates a feeling of inclusion. Viewers like to be praised for their loyalty!

Step 2: Before jumping into the video content, James gives a brief overview of the video and what viewers can expect, then he jumps into a promotion. In this case, it's to promote his "Give-a-slay" giveaway competition for the month of December where he's giving away his own merchandise.
What James did was very clever. He gave viewers a taste of the video before the promotion. If you start a video directly with a promotion, some viewers may lose interest immediately, so just imitate the pacing that James uses to strategically promote your channel's events, like a giveaway or merch sale, whatever it may be.

Step 3: At the end of the video, James thanks his viewers for "always following and supporting" his channel. So once again he is praising the viewer. This is so important! After the praise, he continues by asking for video retweets. Again, this pacing is excellent. Finally, the video finishes with an end screen, and we cannot emphasize enough how important end screens are. We think it's necessary that you make an attractive end screen that features links to your social media pages or other videos, and use it at the end of every video! 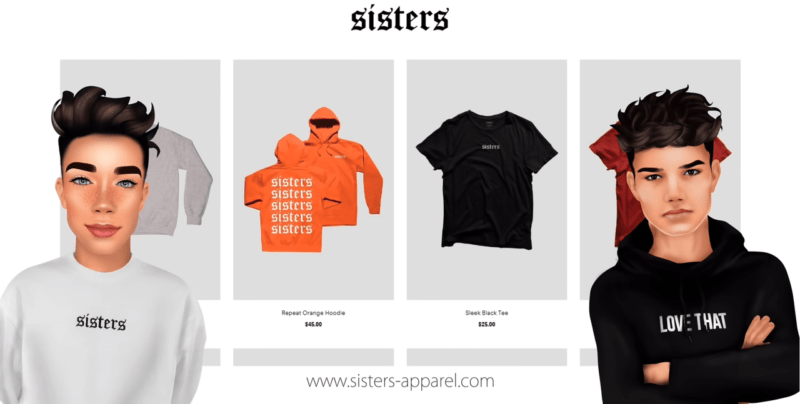 3. How to Collab for Views

Third in our list, "BEST FRIENDS BUY EACH OTHER OUTFITS ft. Dolan Twins & Emma Chamberlain", is a fan favorite because we get to see James collab with other well-known YouTubers. Again, this video has topped 28 million views, which seems to be a magic number for James.

These kind of crossovers are always enjoyable for fans, so start thinking about creators in your YouTube sphere (meaning similar genres and subscriber counts) who you'd like to reach out to for a collab video!

Most Viewed Video No. 3

While you're thinking of who you want to collaborate with, spend some time exploring the below collaboration tips that we gathered from watching this fun James Charles video:

James starts the video off with some banter between him and the guests. This draws viewers into the video and also makes us feel more comfortable with the video guests in case we're not familiar with them. We can get a feel for who they are and the relationship between them and the YouTuber becomes clear when they have a little conversation before jumping into the main content.

In between the banter, James strategically explains the idea of the collaboration bit-by-bit to the viewer. This is a good technique if you want to keep the flow of the video natural. You certainly could begin the video by simply explaining the collaboration idea, but if you prefer a more conversational tone to your content, then follow James' example.

To end a collaboration, it's important to acknowledge the guests on your channel and thank them for making a video with you. James does this by summarizing the collaboration and the good points, "I'm really happy with how all four of the outfits turned out. I think we all really, really killed it!" Ending on an uplifting note like this while praising your channel guests is a great way to wrap up a collaboration video. Another special touch James adds to the end of the video is asking viewers to comment on the collaboration in the comments. This gets everyone involved, so we strongly recommend asking viewers a question at the end of a collaboration video the way James does.

4. How to Entertain and Educate

James is no doubt a master with makeup and fun to watch to boot, but what he isn't praised often enough for is how educational he is.
He is high key a wonderful teacher, and he walks viewers through complex makeup looks with ease.

In his fourth most viewed video, "FULL FACE OF MAKEUP USING ONLY ART SUPPLIES", which has a whopping 23 million views and counting, he challenges himself to create a full glam look with only what you can buy at an art supply store.
This video is fun to watch, but as a beauty YouTuber, there's also a lot you can learn from James' effortless but super effective tutorial techniques. Read below to find out what we love about James' teaching style.

Most Viewed Video No. 4

5. How to Profit from Viral Trends

This hilarious video titled, "TEACHING THE DOLAN TWINS & EMMA CHAMBERLAIN HOW TO DO MAKEUP", is a wonderful example of how to use viral video trends to your advantage. Of course, in James' case, he is basically the one making the trends, not following them. But that issue aside, we will take a look at how you can use viral trends and piggyback off the wave of popularity to get more views for your videos.

Most Viewed Video No. 5

Now, this funny makeup video has 23 million views and the number will likely be even higher by the time you read this, so it's safe to say the video is considered viral. That makes it a great target for recreation (imitation not duplication), meaning there's already a base of viewers interested in this kind of video theme, so you can make your own spin on it and you'll have a guaranteed audience!

An example of how you could imitate this trend is: "Teaching My Best Friend How to Do Makeup", assuming your friend isn't already makeup capable. The twist, which made James' video viral, is that you cannot see the person you are teaching, so they have to follow only your spoken instructions. Fun!

You can easily search and find viral videos on YouTube by checking the Trending page, or better yet, check the recent uploads from your favorite famous YouTubers.
Although they may have many videos to choose from, a good rule of thumb for judging if a video is viral or not is:

6. Get More Views the Right Way 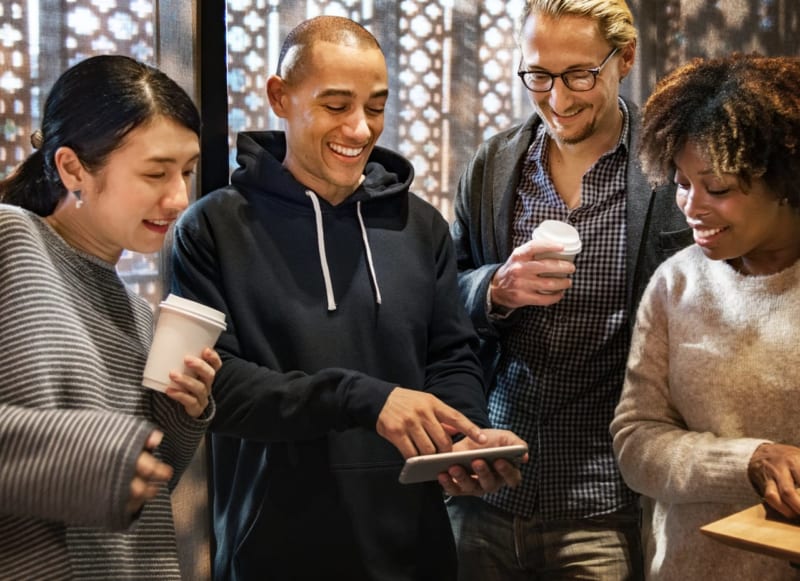 Don't use gimmicky tricks to 'get subscribers and views fast'. These tricks are usually against YouTube's policy, and the subscribers you get most likely won't be authentic, active followers.

We highly recommend standing on the shoulders of giants, like James Charles, and learning everything you can from the artistry of their video production. Use them as inspiration to improve your own content and get more views organically.

You can explore more guides like this below or learn more about making money as a YouTuber—we have something for any type and size of channel!﻿

A Warm Welcome to the Flying Pings Channel